Breaking News: Five critically endangered rhinos from European & UK zoos are flown to Rwanda to be released into the wild.

Our story this week, published a few days ago – comes to us from Victoria Gill of the BBC News Science-Environment team.

In her article, science reporter Victoria Gill quotes Mark Pilgrim, Chester Zoo’s chief executive as saying: These endangered rhinos “were taken from Africa decades ago to display to the public [in European zoos] and now have a real conservation role in Rwanda” as he sums up the significance of the largest transportation of rhinos from Europe to Africa to ever happen.

Victoria Gill explains that it all culminated on Monday (this week) as five zoo-born eastern black rhinos were released in the vast Akagera National Park in Rwanda. The three females and two male rhinos, aged between two and nine years old, came from Flamingo Land in Yorkshire (UK), the Czech Republic’s Dvur Kralove safari park and Ree Park Safari in Denmark. 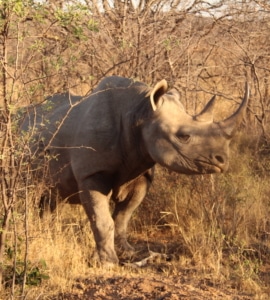 The 6,000km (3,700 miles) journey began at Dvur Kralove, a safari-park/zoo in the Czech Republic – where the endangered rhinos – from their respective locations – were gathered to be prepared for the trip since late last year. The journey concluded and the rhinos new lives began, as each animal stepped out of its custom-made transport crate and into a large, temporary enclosure in the 1,000 sq km park at Akagera.

As Victoria Gill describes – The five rhino will remain in the enclosure, known as a boma, for several months until vets and wildlife experts, who stay in a nearby camp, are happy that they have settled and are ready for life in the wild. The animals’ journey to Akagera, via a flight from Prague to the Rwandan capital of Kigali, took around 30 hours. But the project to bring these animals back to Africa began years ago.

Victoria adds, quoting Jan Stejskal, head of international programmes at Dvur Kralove “The animals being released are the descendants of rhinos that – more than 40 years ago – were taken from East Africa and transported to Europe’s zoos for display. This is the perfect opportunity to take them back to their homeland.”

This translocation represents a significant moment for Rwanda’s natural history. Rhinos have previously been wiped out twice in the country by poaching – once during the 1940s and 50s, when their horns were in demand to make dagger handles, then again in 2010.

Taking their very first steps on African soil, five critically endangered animals have no idea that scores of people – in Rwanda and across Europe – will be rooting for them!

About the Black Rhino

According to Save the Rhino,  Black Rhino (Diceros bicornis) occur throughout southern and eastern Africa, including Kenya, Tanzania, Namibia, South Africa and Zimbabwe.  They weigh up to 1300kg and few remain in the wild. They are critically endangered. There are 4 species, all are greyish in colour (despite the name) and all have this typically hooked, prehensile top lip, which means they are categorised as browsers, as oppossed to the white rhinoceros (also grey in colour) which has a much flatter top lip, more suited to grazing.  According to the World Wildlife Fund (WWF) populations of all rhino species have been decimated by years of poaching based on the belief that their horns have special medicinal properties valued in Aisan communities.  Despite decades of research showing this is not the case.  This is tragically the same for Pangolins – a story we featured in a blog a few weeks ago!

Highlighting the ongoing threat to these animals from poachers, Victoria Gill writes:

“Probably the biggest concern when planning this release was to find a place where the animals would be safe. The threat of poaching remains, with the demand for rhino horn apparently shifting from its perceived medical value (it actually has none) to a demand for jewellery and other valuable “trinkets” carved from it.  This persistent threat has meant finding a national park with an armed security force and high tech anti-poaching solutions. Akagera, which is managed by the conservation organisation African Parks in partnership with the Rwandan government, fits the bill.”

This is a tremendous story and one that highlights the important and often under-stated conservation role played by zoos!